It has been said that housing is, by far, one of Australia’s largest assets and the foundation of its household wealth, financial system and economy. Little wonder, that: as of Dec 2017, the total value of the nation’s 10 million residential dwellings stands at $6.8 trillion according to latest official estimates by the Australian Bureau of Statistics (ABS).

Over the last 5 years, house prices in Sydney and Melbourne — two of Australia’s biggest property markets — had increased 75% and 59%, respectively.

Just 3 months ago (Oct 2017), a report by the Swiss-based Bank of International Settlements (BIS) pegged Australia as having the 6th highest rise in annual property prices in the world over the last 5 decades, with house prices surging 6556% since the 1960s at an average increase of 8.1% per year.

Be that as it may, Australia’s housing market saw substantial moderation in 2017 (particularly the second half) led largely by Sydney, and, to a lesser extent, Melbourne, due to stricter lending measures which have affected investor appetite. What, then, would the outlook be like in 2018? 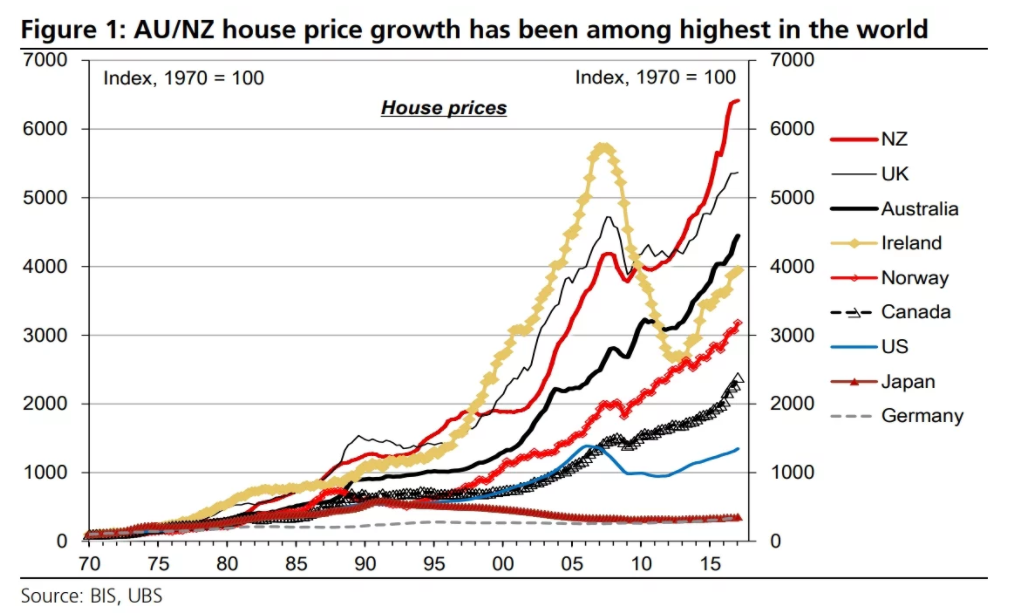 The Bank of International Settlements (BIS) pegged Australia as having the 6th highest rise in annual property prices in the world over the last 5 decades, with house prices surging 6556% since the 1960s at an average increase of 8.1% per year. Image credit: http://bit.ly/2ri0BEl

The property market will continue to see growth in 2018, albeit at fairly modest levels as tightened regulatory and lending criteria for investors remain in place. The moderation of house values across Australia will be driven by Sydney, which had already begun experiencing a drop in price levels in Nov 2017.

Yes, it does appear that the Sydney boom is over, but while we agree with the common perception that prices in Sydney may fall in 2018, we don’t think the prices will drop drastically within the year.

In Melbourne, price growth will also ease though not at Sydney’s rates, given that property is more affordable. Speculators are pulling back but serious investors know that the city is backed by strong population growth. Again, in both cities, we don’t see anything that suggests widespread declines in prices.

Perth will be a city to watch as we think the housing market has finally reached its bottom. Market experts predict that Perth property prices will be flat in 2018, but that interest levels and, consequently, demand will eventually pick up. A recent ANZ-Property Council Survey reveals that confidence levels in Western Australia are rising to similar levels seen in Australia’s eastern states.

See also  100 Days On, Is there Hope in Pakatan Harapan?

Experts are also predicting modest growth to continue in Adelaide and Brisbane, slowing at more moderate levels in Canberra. Hobart, Australia’s stand-out performer last year, will continue to have strong growth levels, albeit slower than its double-digit surge in 2017.

The value of the property market next year will depend largely on whether the Bank of Australia (RBA) will increase interest rates, or if there will be further tightening on lending criteria. That said, it looks unlikely that interest rates will budge from the 1.5% level that it is at currently.

The latest Foreign Investment Review Board (FIRB) Annual Report 2015-2016 found that residential real estate applications had increased by 19% to to $72.4bn in 2015-2016 compared to $60.8bn in the previous year. The total number of applications approved for residential real estate had also jumped from 36,841 to 40,149 during this period. It is interesting to note that residential property approvals comprised 96.9% of all foreign investment approvals.

The largest residential approvals were in Victoria (44%), followed by New South Wales (32%), Queensland (17%) and Western Australia (4%). Meanwhile, the top 10 countries that dominate real estate in Australia include China (highest at $31.9m), US, Singapore, Malaysia and Japan.

Tightened regulations will continue to moderate investor sentiment, but not too substantially, as the housing market remains underpinned by strong population growth. This will translate to increased demand for housing.

The latest report by the Australian Bureau of Statistics (ABS) shows that Australia’s population grew by 388,100 people with Victoria being the fastest-growing state or territory, with a population increase of 2.3%.

See also  Is Growth in Store for Australian House Prices?

“NOM in NSW and Victoria increased by 31% and 23%, respectively. This growth has seen both states surpass their previous recorded high in 2008-09,” said ABS Demography Director Beidar Cho.

Despite the cooling in price growths in the mainstream markets, Australia will continue to attract migrants, says Virata Thaivasigamony of CSI Prop.

“There is a strong desire to live in Australia, and this will cause demand for property to increase,” he says. “Naturally, investors will question whether property will remain a good investment, but it is the strategic investors who will view property with a long term outlook. This period of slower growth is a buying opportunity for long term appreciation.”

For whatever it’s worth, the current ANZ-Property Council of Australia Confidence Index (March quarter) came in at 137.7 in their latest survey, just below the all-time high of 139.5 in the final quarter of 2017. That’s a lot of confidence in the market!