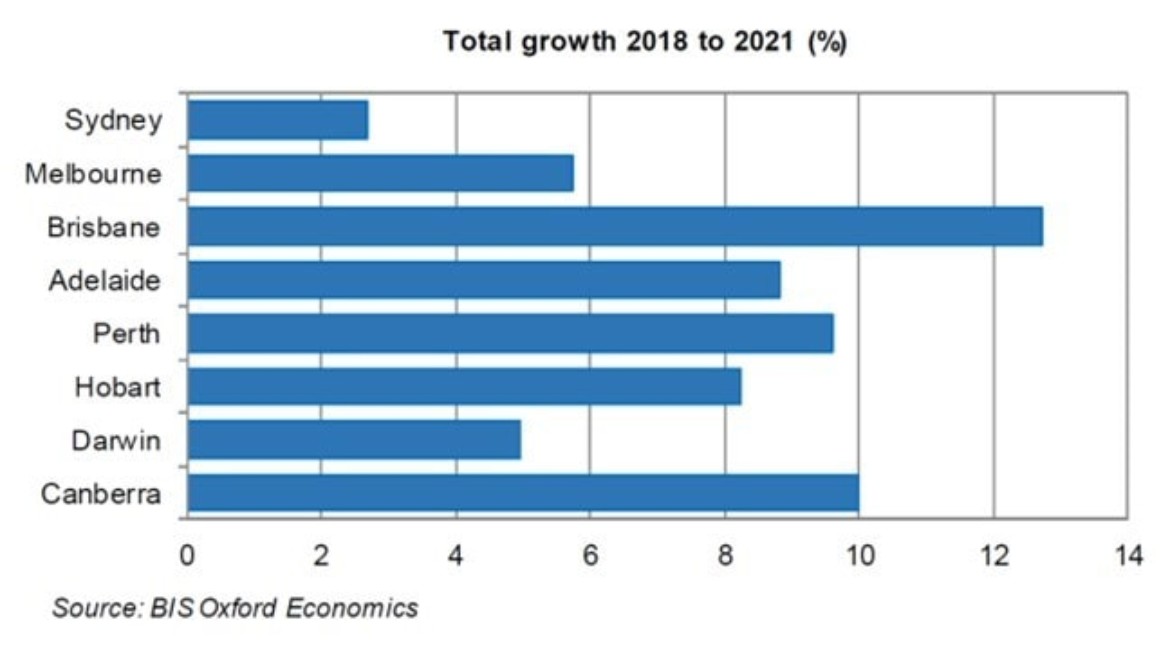 Australia is a diverse land that is home to a wide range of fascinating natural landmarks and iconic destinations. It is the world’s 12th largest economy, and ranks up there as one of the most well-developed countries in the world.

Property is one of Australia’s largest assets and a strong contributing factor that influences its economic wealth. On a global ranking, Australia has had the 6th highest rise in annual property prices over the last five decades, with house prices surging at an average increase of 8.1% per year.

Research by BIS and UBS shows 9 out of 10 properties made a profit in spite of the slowdown in the housing market. However, the market saw a moderation in 2018 with Sydney being the hardest hit, it affected investor’s appetite due to the stricter regulatory and lending measures.

A prominent factor that underpins the Australian economy is its population growth. Australia’s population grew by another 1.6% to 24.7 million in the 12 months to the end of September 2017.

Known as Australia’s cultural capital, this city that is home to diverse landscapes and cultural history is the sanctuary for coffee lovers. From sandy beaches and historic museums to artisan cafes, Melbourne has it all.

Voted as the world’s most liveable city for seven consecutive years, Melbourne is home to a population of 4.9 million people. The city is set to beat Sydney to become Australia’s most populated capital by 2036.

After five years of steady growth, the Melbourne property market is in for a soft landing following its peak in November 2017. Though experiencing a slight fall, property prices in Melbourne are unlikely to crash as it is underpinned by a robust economy.

Being one of the 10 fastest developing cities and having owned Australia’s strongest population growth rate, Melbourne’s population is set to increase by 10% in the coming years. This has opened the gateway for higher employment rates alongside 35% influx of skilled immigrants. These factors contribute to the moderate rise in rental rates and property prices in Melbourne.

The undersupply of homes is another indicative behind the possible rise of house prices. Urban Development Institute of Australia (UDIA) predicted that if the current situation persists, housing shortage could reach an excess of 50,000 houses by 2020.

With the current population growth exceeding 2%, increasing employment rate and construction activity, Melbourne and its surrounding areas are likely to produce many Hotspots going into 2019.

According to the HIA Population & Residential Building Hotspots Report 2018, the Mickleham-Yuroke area of Melbourne is Australia’s most wanted hotspot, with a population growth of 35.3% during 2016/17 and $222.9 million in building approvals.

As Western Australia’s sun-drenched capital, Perth has established itself as one of Australia’s prominent travel and business destinations.

Home to King’s Park and Botanic Garden, one of the largest inner city parks in the world, Perth has some of the world’s finest brands to shop at alongside a thriving city life.

Despite being a city, it is not far from picturesque oceans and beaches. This balance between nature and cosmopolitan living makes Perth an attractive site for investment.

The Perth property market has taken a plunge in the last five years since its peak in June 2014.

With the falling values, research has suggested that the housing market in Perth is in for a bottom out with median house prices set for a decline over the period of 2018/19.

Nevertheless, property prices in Perth are expected to rise in the next two years. The outlook for the state’s economy remains positive with the market beginning to retreat again.

Industry analyst, BIS Oxford Economics, in its latest report revealed that Perth is tipped to have the second-fastest price growth in Australia by 2021, rising by 10%.

In some parts of Perth, prices are on demand year-on-year (y.o.y) where it has increased by 6.6% which indicates that the property market is in for recovery. Perth’s vacancy rate was at 5.1% for March 2018 and is forecasted to increase.

For investors seeking an investment prospect with promising yields and returns, Perth might just be the answer.

Sydney is known as Australia’s leading global and premier city. It is the destination of choice for entrepreneurs, tourists and students alike.

Rich with a number of tourists spots such as the Sydney Opera House and Sydney Harbour, this city continues to grow in popularity.

Comparatively, on a longer span, over the last five years, statistics show that average house prices have increased by 51%. Despite the current fall, the property market in Sydney is expected to ascend in the near future.

Rising economic and population growth alongside the increase in employment rate are aspects that would surge the Sydney property market. Foreign investors continue to channel their interests here as prices are looking to rise again in 2020-21.

The NSW government will be directing $A15.3bn towards infrastructure in the next year in order to improve the quality of living and provide a more efficient and convenient commute in and out of the city.

With all these advancements being made, Sydney is on its way to becoming a promising investment for foreign investors.

Blessed with idyllic weather, award-winning food and wine, adventurous activities and fun destinations for weekend getaways, Brisbane is the hotspot among tourists and investors.

With the second fastest population growth in Australia, Brisbane is set for a prospering year especially in terms of its property market. According to BIS’s forecast, this city will see the strongest growth over the next three years with an increase of 13%.

Buyers and investors are drawn to the state’s affordability that it attracts a larger number of inter-state migrants with an overall dwelling of 5.9% y.o.y.

Apart from its affordability, the city also shifted its focus on improving its infrastructure to accommodate increasing population growth, alongside the growing job demand.

The influx of large scale developments coupled with major employment hubs will further enhance the liveability of the city. These developments will significantly boost Brisbane’s employment growth and increase the demand for housing and property.

The Australian property market in for a rise, which means property investors can get better returns by buying now while the market is still low. If you are looking for property in the cities of Sydney, Melbourne, Perth, Brisbane and more — give us a call at (+65) 3163 8343 (Singapore), 03-2162 2260 (Malaysia), or email us at info@csiprop.com!