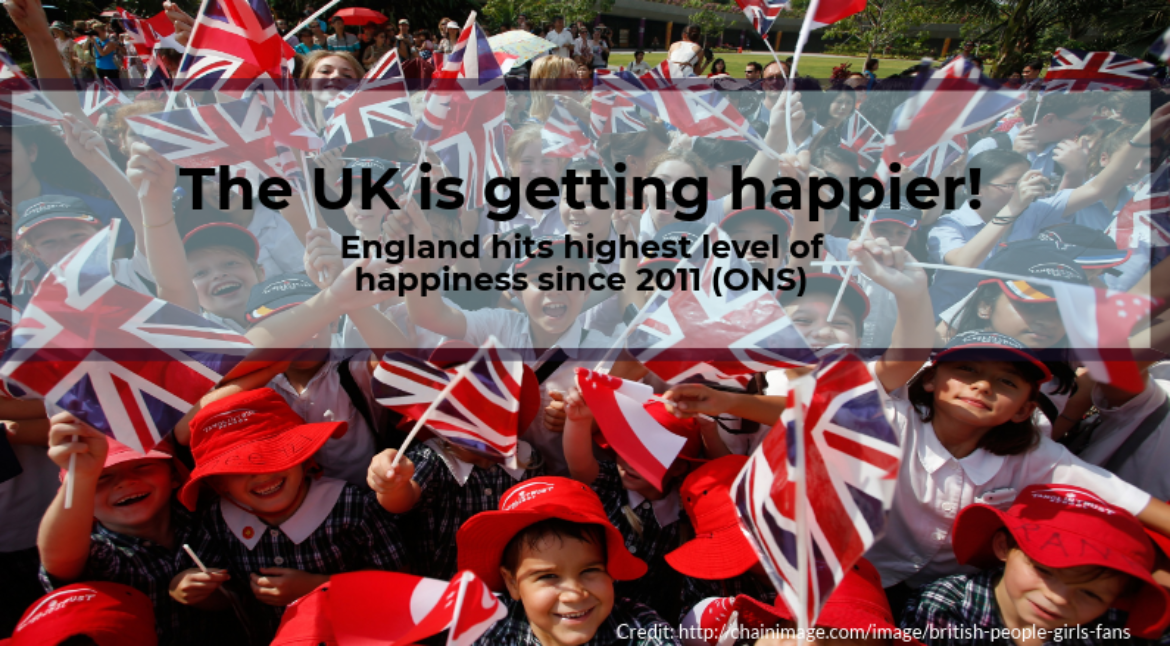 Despite concerns over the uncertainty of Brexit and the effects it might have on household budgets, the Office for National Statistics (ONS) has reported that England has hit its highest level of happiness since 2011.

Despite concerns over the uncertainty of Brexit and the effects it might have on household budgets, the Office for National Statistics (ONS) has reported that England has hit its highest level of happiness since 2011. On the other hand, there have been no significant improvements in happiness in neighbouring Scotland, Wales or Northern Ireland.

The method of research is fairly simple, depending entirely on citizens self-reporting their feelings; those aged 16 and over were asked to rate their “happiness”, “anxiety” and “worthwhile” levels out of 10.

The results from 2011 showed that for the most part, England’s overall happiness was faring well at an average rating of 7.29. Interestingly, this figure has now risen to 7.52. In terms of feeling “worthwhile” the average score has risen from 7.67 to 7.87. Even anxiety levels have dropped from 3.13 to 2.92  — why is this the case?

Silvia Manclossi, head of the quality of life team at the ONS, said, “People’s social connections and health status play an important part in personal wellbeing. However, some economic factors are also important, so perhaps this trend over time is not surprising as the country came out of the economic downturn. ”

It seems that England’s citizens have been, even with misgivings that accompany economic unpredictability, finding their own reasons to continue thriving.

Manclossi also mentions the large difference in overall happiness levels between those of different ages, giving the quality of life team at the ONS something to look further into. A quick look at said discrepancies reveal the following:

Happiness Level: UK vs other countries?

In a dispatch called the World Happiness Report 2017, an initiative of the UN’s Sustainable Development Solutions Network, a group of independent experts including economist Jeffrey Sachs surveyed people in 156 countries to find out how highly they evaluated their lives on a scale from 0-10.

The top 5 spots were taken by Nordic countries; Norway tops the list, followed by Denmark, Iceland, Switzerland and Finland. The UK found itself taking the 19th place, right after Luxembourg. Worth noting is Australia’s title as the 9th happiest country in 2017 as it is also home to the World’s Happiest and Most Liveable City, Melbourne.

While explanations for this list are naturally complex, experts have condensed them roughly into six factors: income, healthy life expectancy, having someone to count on in times of trouble, generosity, freedom and trust, with the latter measured by the absence of corruption in business and government.

Evidently, the UK  has managed to remain resilient in the face of uncertainty following Brexit — if the citizens are getting happier, something must be working right!