Victoria Smashes NSW for the Second Time in a Row 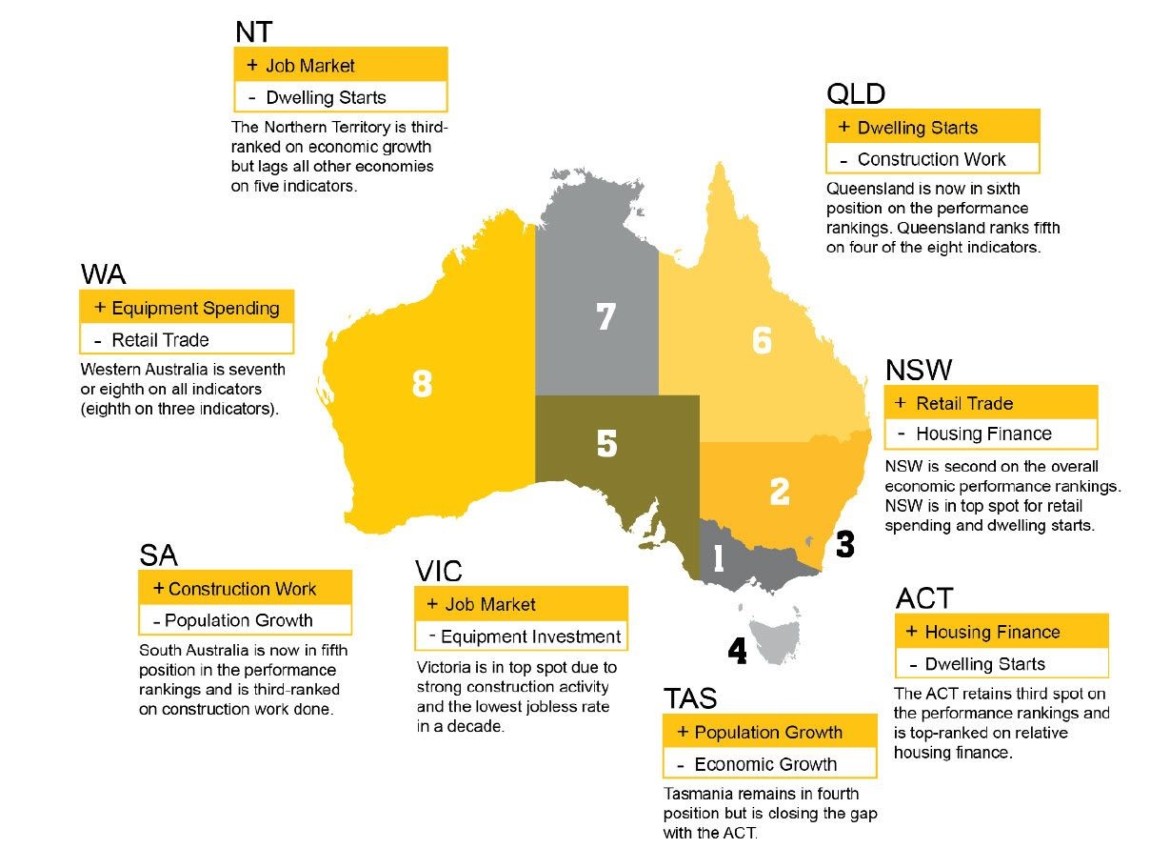 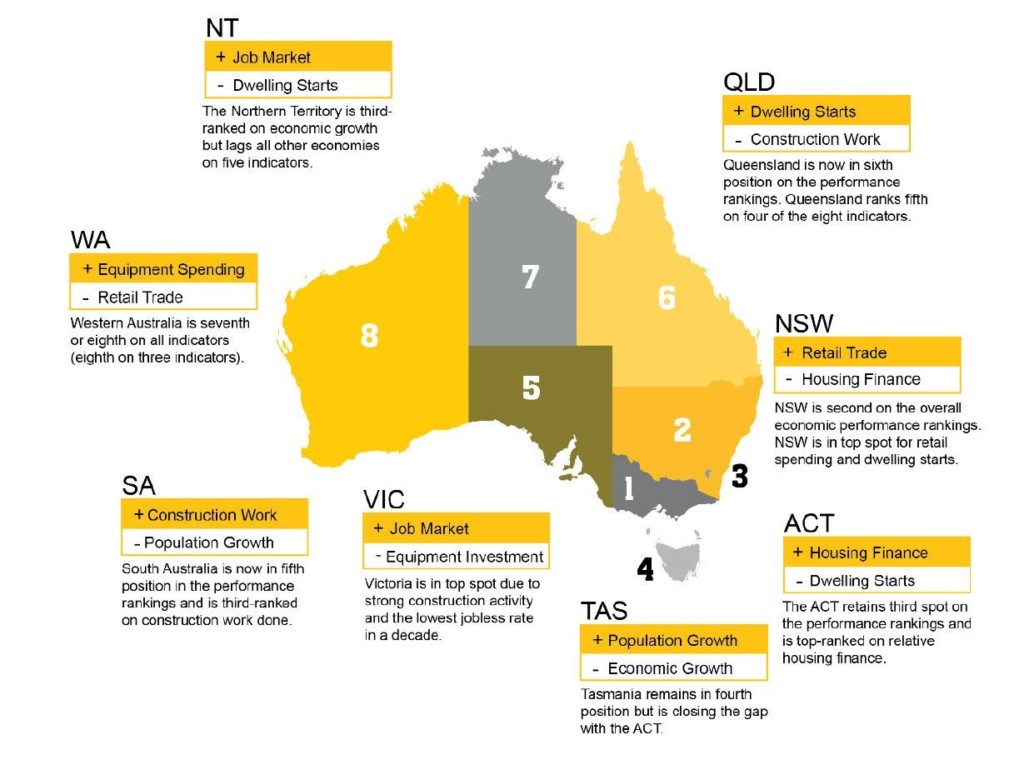 Once again, Victoria has overtaken New South Wales (NSW) as the state with the strongest overall economic performance rankings in Australia.

Margin lender CommSec’s latest quarterly (Oct 2018) State of the States report has revealed that Victoria has come out top in several key indicators, namely economic growth, employment, construction activity and population growth. This is the first time that Melbourne has beaten Sydney as the best place to find a job in Australia, with trend unemployment rate at its lowest in a decade.

Apart from the employment rate, Victoria was also ranked first in construction activity. This is the second time that Melbourne has beaten Sydney to the top spot in this sector.

NSW construction was next strongest at 31.4% followed by South Australia, up 25.3%. Construction work done in these states were at record highs in the June quarter.

Victoria also topped the ranking for the second consecutive time as the state with the highest economic growth. Last quarter, it knocked NSW off its perch for the first time in a decade.

Economic activity in Victoria in the June quarter was 26.7% above the decade average level, ahead of NSW at 25.7%.

When looking across growth rates for the states and territories, it is clear that Victoria had exceeded the national average in all of the eight indicators measured, albeit by a narrow margin.

Investors can look forward to leveraging upon these promising aspects of Melbourne, using it as a guide to future investments that could result in good rental yield and capital appreciation. 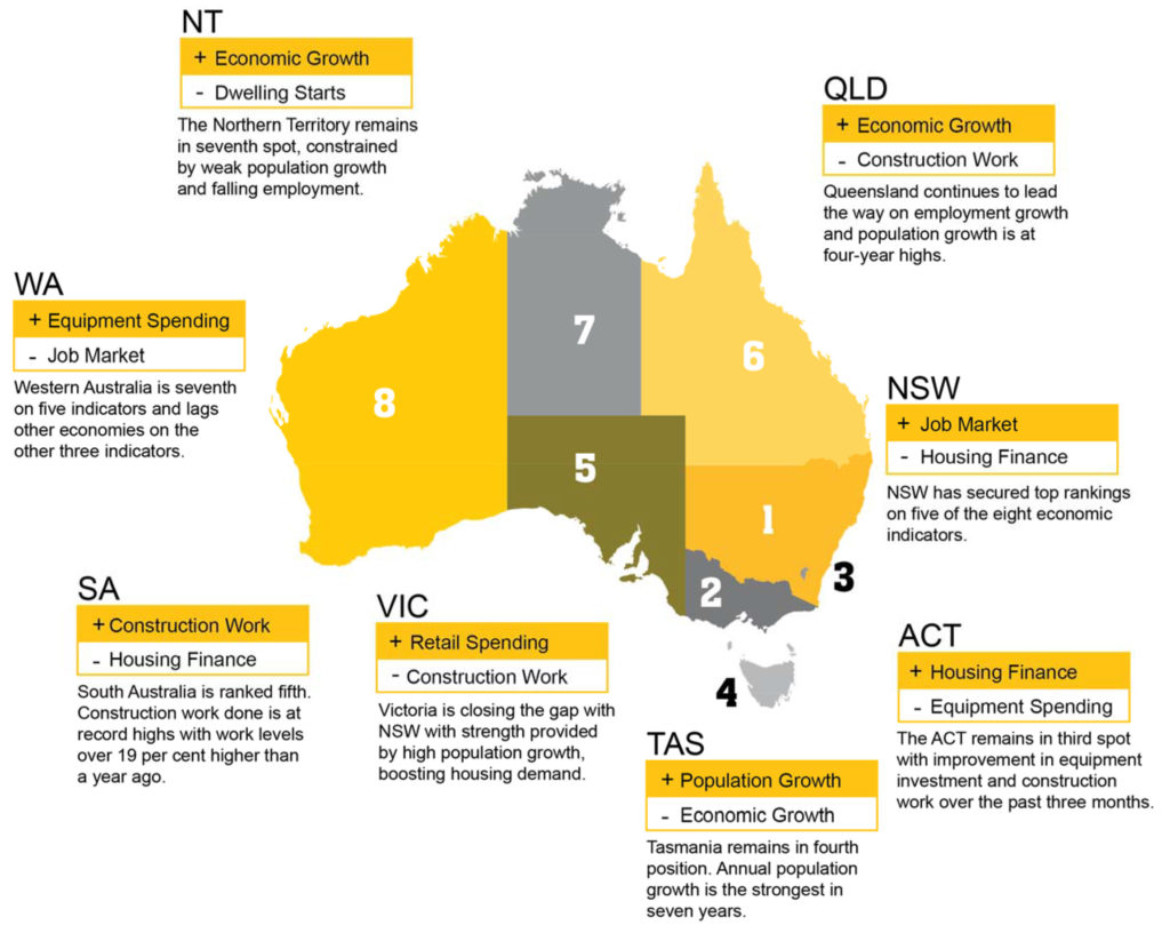 Victoria, for the first time ever, has finally overtaken New South Wales (NSW) as Australia’s strongest economy, according to CommSec’s latest State of  the States report.

CommSec (Commonwealth Securities) is Australia’s largest online stockbroking firm operated by the Commonwealth Bank of Australia. Each quarter, it releases its State of the States report, which is an economic performance report of Australia’s states and territories. The report covers eight major economic indicators including population, employment, housing, investment, and construction.

Victoria has never owned the top spot in the report’s nine-year history until now, thanks to strong population growth numbers which have been instrumental in driving construction activity. The state currently ranks first in economic growth, dwelling starts and construction work done. In economic growth, Victoria is ahead at 26.5%, followed by NSW at 25.7% and Northern Territory at 25.6%, while Western Australia remains in the last place by 7.6%.

NSW, long standing at the top spot for economic growth in the last four years, slipped to second place due to declines in a number of housing indicators.

The gap between the two states, however, remains narrow, leading to the possibility of a change in positions over the next 12 months, said CommSec’s chief economist Craig James.

In terms of population growth, Victoria maintains its position as the clear winner, having toppled other states since 2015. Victoria currently holds a population growth rate of a cool 2.3% above the Australian Capital Territory (ACT) at 2.15% and Queensland at 1.67%.

Meanwhile, the Northern Territory has the lowest population growth at 0.23%.

Victoria is poised to remain in the lead for population growth with research predicting that population figures will reach approximately 6.26 million in 2018.

Thus, Victoria’s meteoric population growth will continue to spur Melbourne on as it maintains its credentials as Australia’s “most attractive city” due to stronger rental growth supported by tight vacancy.

With the current undersupply of housing, and demand driving prices, it appears that Melbourne will continue to remain, for some time to come, Australia’s Most Attractive City for global property players in the Asia Pac region.

Looking to purchase a property in Melbourne City? Hit us up — we’ve got limited stock of one of the best residences in one of the most coveted locations in the city. Or, just connect with us to find out more!