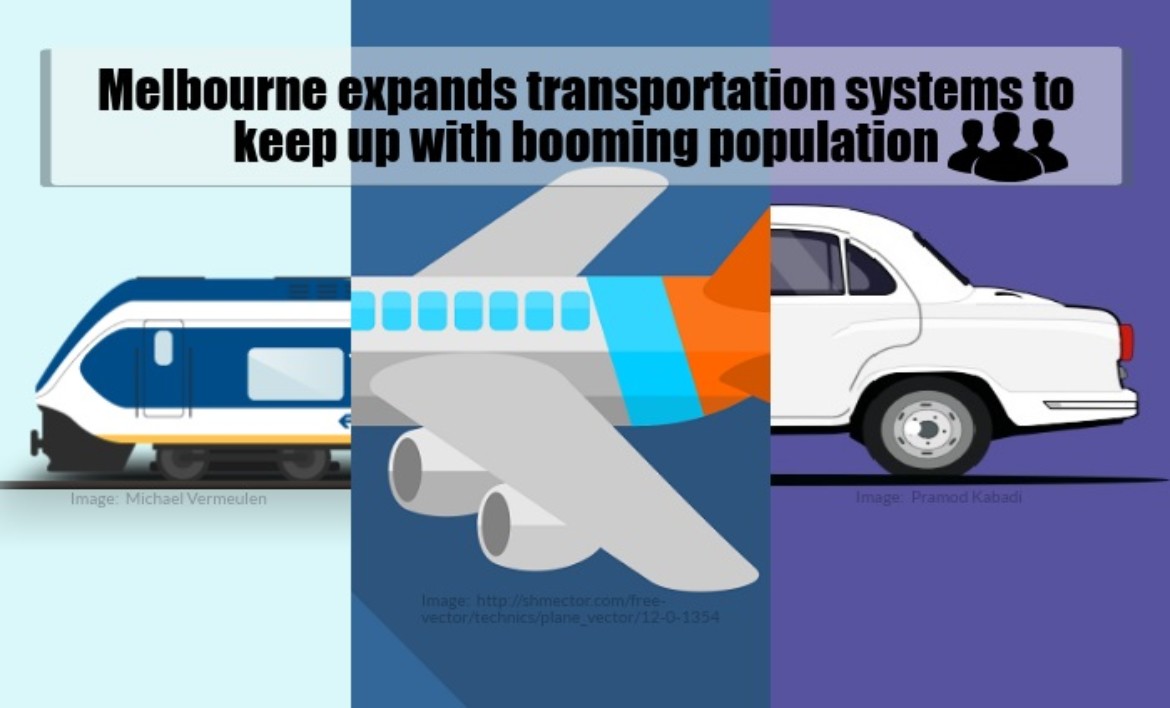 Melbourne’s population is set to keep growing, driving the need for improved and expanded transport-related infrastructure. Opportunities continue to abound for the investor as the city’s planned and ongoing transport expansion leads to jobs creation, driving the demand for more housing.

Melbourne looks set to expand its transportation systems in the air, on land and beneath the ground to keep up with its rapid population growth — so rapid, in fact, that Melbourne is set to surpass Sydney as the largest city in Australia by 2031.

Major infrastructure development plans, totalling to over $60bn, are underway, with most projects set for completion by the 2020s and 2030s. For property investors, this translates as good news. Increased job opportunities and continuous effort to preserve Melbourne’s unprecedented quality of life will ultimately continue to attract home buyers and renters alike. After factoring in the chronic undersupply of houses throughout the city, paired with population and economic growth, investors should arrive at one solid conclusion: Melbourne’s property market is a promising one.

Melbourne Airport CEO Lyell Strambi has announced the need for a third airport runway to keep up with booming passenger numbers, following the airport’s celebration of nine consecutive years of passenger growth.

Over 35 million passengers passed through Melbourne Airport during the 2016/17 financial year, and this number is expected to almost double by 2033. This inevitably makes the establishment of the new runway one of Melbourne’s top priorities. The runway, set to operate by 2022, will not only reduce delays as more arrivals and departures take place, it will also supply numerous jobs during construction and operation.

Melbourne Airport is known to be a major employer in the local region. About 16,000 people are currently employed at the airport, with 67% of these jobs filled by people whose homes are within a 15km radius of the airport. It is predicted that by 2033, the number of jobs directly related to Melbourne Airport’s operations will grow to 23,000. Furthermore, with a burgeoning number of travellers arriving in Melbourne Airport, the tourism industry throughout Victoria will surely provide even more jobs!

What is also set to improve tremendously is accessibility by car, as plans for three separate roadworks commence throughout the state of Victoria. The North East Link, the largest of the trio and currently, the largest transport infrastructure in Victoria, is a $16.5bn construction that will fix the missing link in Melbourne’s freeway network. The project will shorten travel times between Melbourne’s north and south-east by up to 30 minutes, take 15,000 trucks off local streets daily and deliver kilometres of new walking and cycling paths. During construction (expected to begin by 2020) and early operation, thousands of jobs will be created.

Perhaps the most interesting transport development plan in Melbourne is the $1.3bn rail loop and driverless trains that will connect a proposed $30bn ‘super city’ at East Werribee, known as the Australian Education City. Preliminary works to assess the feasibility of this new heavy rail connection have been done as part of the ongoing proposal.

The multi-billion dollar project would see land at East Werribee become home to 30,000 dwellings in medium to high-storey towers, with universities, schools and a research and development hub. Up to 80,000 residents and 50,000 students are planned for the precinct which would see local and overseas universities collaborate to provide world-class education across several campuses. Global tech leaders, such as Cisco and IBM, are eager to snatch a piece of this colossal project.

Underground: Two New Rail Tunnels Need To Be Constructed By 2035

Council documents reveal that, should all go according to plan, the second tunnel that links Newport to Clifton Hill via Fishermans Bend, will operate by 2028 or earlier. This tunnel would quadruple passenger capacity for the Werribee line corridor and boost east-west accessibility. Those from the south-west and north-east, too, will find this line adding considerable convenience to everyday travels.

As described in the council paper, Melbourne Metro 3 could be built by 2035. The project would be the second airport rail line linking to Southern Cross, via Arden Macaulay and Maribyrnong. By 2028, trips to Tullamarine Airport is expected to be equal to that of Heathrow Airport today — three rail lines currently service Heathrow.

The various transportation schemes currently in the works will welcome the rising population in Melbourne. To the savvy investor, the widely cited population and economic growth within this coastal capital reads as a precursor for high housing demand. Those with concerns regarding the environmental impact of these projects can be rest assured that measures taken will be passed through strict approval processes before arriving at the least detrimental conclusion.

“Infrastructure projects – electricity, roads, airports, water systems and telecommunications are the foundations of modern economies. They have a huge multiplier effect (a dollar spent on infrastructure leads to an outcome of greater than two dollars)”*. Astute investors realise the mileage that such multiplier effects bring to the investment dollar. If you’re planning to leverage on that and are looking for fantastic property investment options in Melbourne, hit us at at 03-2162 2260 or info@gmail.com or text us in the comment box below!